Expanding to the Performing Arts with Uni2ACT 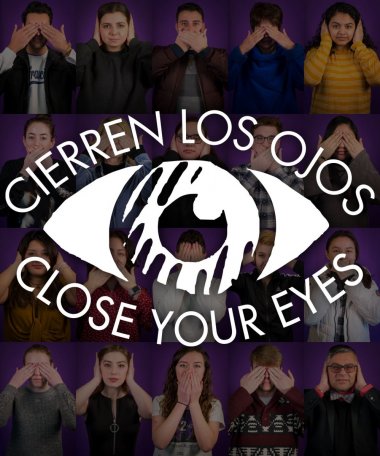 Although we started out as a photography project, our mission is to challenge stereotypes using art in general, so we were excited when we were approached by Uni2ACT, the College of the Holy Cross’s bilingual theater troupe to create a play inspired by the project.  We had photo shoots at the college as well as photographed the cast for use in promotional materials and a slideshow projected onto the stage before the show. The play itself, Cierren los ojos or Close Your Eyes, echoed the themes of the project from the writers’ and actors’ real life experiences. In one scene, characters made fun of photos of students from the collection before those actual students stood in front of projections of their set to tell their real life labels and good deeds.  It was later revealed that the taunts were actual things they and others had heard in real life. Other scenes addressed racism, gender identity, and sexual assault and harassment, but expertly designed so that the victim of one may be the aggressor in another, showing the complexity of these themes.

“Ellen had encountered the No Evil Project at stART on the Street in Worcester and that’s when she bought the idea back to Uni2ACT.  All students worry about how they define themselves and how others define them, so the whole concept of labeling self and labeling others went hand in hand with previous Uni2ACT performances that had dealt with identity— racial, sexual, religious, ethnic etc. Our collaboration with the No Evil Project added a profound visual and philosophical depth to our performance. The photos and labels of over 120 members of the College community were printed on banners that were displayed around campus in the weeks leading up to the performance and they created a lot of buzz. Then, by building several scenes around labels and labeling directly and using a series of the No Evil Project photos as a visual backdrop to those scenes, our Uni2ACTors were able to bring the whole process of labeling to life on stage.

The Uni2ACTors thoroughly enjoyed the collaboration. Seeing how people self-label gave a lot of validity to feelings that are sometimes difficult to articulate publicly. The good deeds labeling was also a very important part of the labeling scenes in the play as the lesson to not judge a book by its cover was clearly and dramatically—pun intended—highlighted. Our mission states in part that we “seek to promote self–discovery, empathy, confidence, and hope.” The No Evil  Project helped us to achieve all of those goals within the troupe and to project this positive message to our audience.” —Co-Directors, Professors Ellen Lokos and Helen Freear-Papio, College of the Holy Cross