Multilingual Exhibit to Challenge Ageism at the Worcester Senior Center 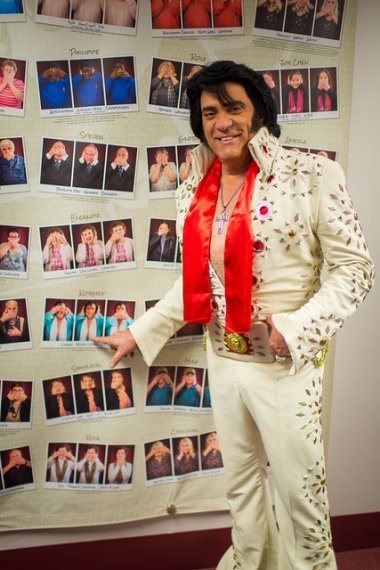 We originally teamed up with the Worcester Senior Center to challenge stereotypes about seniors and how they contribute to the community.  As we learned more about their community, one of the things that stood out was the wide variety of languages spoken at the center. For almost half of the 120 seniors we photographed, English wasn’t their native language and many didn’t speak much English at all.  Through the use of the center’s translators, we were able to explain the project, walk them through the poses, and translate their labels and good deeds. The resulting permanent exhibit features their labels written first in their native language - Spanish, Arabic, Chinese, Vietnamese, Albanian, and French - with English translations below to capture that aspect of their diversity visually as well.

“The banners provide a visual display of our community which generates conversation and awareness of our differences in a positive way.  It allows viewers to see that someone who might be stereotyped as “elderly” or an “immigrant” has many other personal qualities, and that everyone contributes goodness to the world.  As the display is near my office, I have had the privilege to witness many interesting conversations and smiling faces as people stop to view it. There is no doubt that this project has contributed to the health, confidence and understanding of and between seniors, thus meeting our objective.” —Amy Vogel Waters, Director, Worcester Senior Center/Elder Affairs

“It was really fun working with people and inviting a conversation to talk about their many talents, likes, interests, and to learn what is most important to them. People really had to narrow down how they’d like to define and portray themselves in 3 words. It brought out a sense of pride and accomplishment, especially among the senior populations.  Sometimes, despite people having certain achieved credentials, it was interesting to see that what some finally choose revolved around family or recreation. Showing that despite certain degrees, professions, it was the family around them and the things they enjoyed doing/are interested in now as most important. On the same token, it was great to learn what people were proud of about themselves, including their achievements, especially for those who don’t get to speak about themselves very often. The picture taking was fun too!” —Lindita Taka, Senior Services Program Assistant at City of Worcester Elder Affairs Division

No Evil Project at the Worcester Senior Center